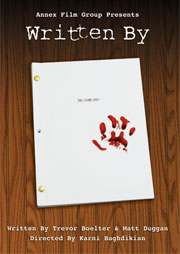 Two hotshot screenwriters lock themselves in a room to finish a script about a haunted clown doll…and discover how to write a killer script.

Project Overview Written By is my first studio film. Not like, studio as in, we pitched it to the studio and they bought it and gave me a million dollars to direct. But rather, in my approach, and in the subject matter. This was a film I was actually asked to shoot for Annex Film Group, and when you work for someone else, you do it in half the time and twice as good. So that was my approach here, essentially…going from indie take-your-timing it to delivering to the studio. Which is also sort of what the script is about, which is why I chose to take that mindset.

The subject matter — two screenwriters locking themselves in a room to finish a draft — was of particular interest to me, because at the time I was asked to direct this project, I was midway through the UCLA Professional Program for Screenwriting. The things that go through a screenwriter’s head on a daily basis, and the exploration of ego, insanity, and human emotion, corroborated my daily existence; moreover, this was an opportunity to deepen my understanding of how writers break through walls of the craft. Or fail to.

In pre-production, my DP David Mahlmann recommended that we shoot with the RED ONE camera, which posed several technical and workflow questions, but was head and shoulders the best option. Then, we got access to a studio backlot for our 3-day shoot while the TV season was on hiatus. We were given a sound stage with preexisting tear-down sets to do whatever we wanted with, for a fairly messy script. One couldn’t ask for more.

I had never shot anything that someone else had written. So I worked very closely with the superbly talented writing duo that penned the screenplay–Trevor Boelter & Matt Duggan–and we shaped it into a super-tight shooting script.

Given that the subject matter delves into the subject of two screenwriters who are extremely difficult to work with, and that the script’s writing duo were actors themselves, we decided to cast them in the lead roles. So right away, we went very Malkovich-Malkovich in our approach, with the writers writing writer characters and then playing them, because they then had to go through the experience of having a Director interpret their vision differently from their writer’s minds, while then taking direction from that guy. Of course, they nailed it.

We got on set and shot the heck out of it–pressure packed and simultaneously great fun, because Annex Film Group always comes ready to roll. All the while, we watched dailies in real-time and cut a rough draft together by production wrap. The first rough cut was ready one week later with temp tracks, titles, the whole schebang.

Ultimately, we shot a 4-day show in 3 days, and took full advantage of creative license to output a final print that we’re extremely proud of. We topped it off with a big Austin Wintory score, which was a real…score. (Sorry, I couldn’t resist.)